At Poem 88 you get something extra, a lagniappe. It’s not a cheapie thrown in like a thirteenth beignet, though. It’s something fully nourishing, a dish in itself. During the current show, it’s the title theme, “Et in Arcadia ego.” Even in that idyllic village, people die. Poem 88 refers you to the paintings that address this idea, and then draws a connection to the works currently on display. It’s delicious.

The three artists in the show make works that refer to a kind of idyllic village.

Allyson Ross shows sculptural works on paper, and they depict scenes from the Yosemite Valley. 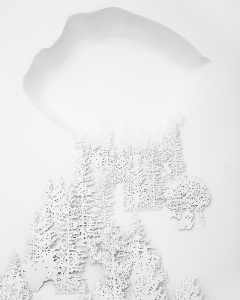 Half Dome, detail, by Allyson Ross, via allyson-ross.com

Ted Fair shows photographs that seem to be from a spirit of purposeful wandering to find the strange juxtapositions in the American landscape. 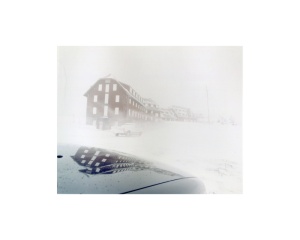 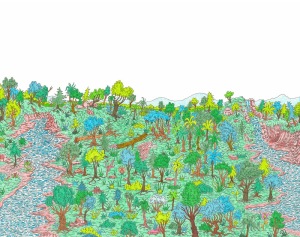 The overriding idea of Arcadia gives the viewer a unifying theme through which to view these works. It’s also true that that theme can quickly fall apart. Are we contemplating the pervasiveness of mortality, or are we inquiring into the ideology that led us to believe that “Arcadia” was idyllic in the first place?

In each of the three artists we can find what may be an assumption that the “natural” world is idyllic. Allyson Ross’s work is motivated (artist’s statement) by the belief that certain historical photographs of the Yosemite Valley are inadequate to display that place in all of its dimensions. She seems not to question the heroic views of Yosemite in those historic photographs, which depict a place that was actually inhabited by humans for thousands of years. It’s only a question of how, technically, to make art of the grand and evocative natural monuments. 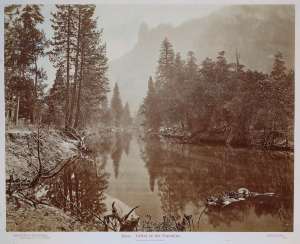 Yosemite Valley, by Eadweard Muybridge, one of the photographers to whom Ross makes reference

Ted Fair’s photographs often show what appears to be a wild landscape interrupted by an obstructive fence or some other manmade intrusion. The cooling towers of a nuclear power plant glow in the night. Lush vegetation is invaded by an installation of balloons, and is watched over, not by a living presence, but by a sculpted monument to a canine. These juxtapositions suggest that the photographer views human activity in wilderness as designed to exploit an innocent nature to the point of its destruction.

Sean Abrahams’ drawings are fanciful imaginings of a wilderness, but each part of the landscape is recognizable. The mountains and hills are gentle. The streams flow with thick blue cartoon fluid. The trees sometimes sprout hair or hands instead of leaves, and each tree has its own plentiful space within which to be recognized. It’s strange, though, that there is no sky, but just the white of the paper above it all. Also, no animals live here, and no humans. In these pictures, nature is a place where the human imagination enjoys the peace and freedom of solitude, and perhaps the luxury of allowing things to be incomplete.

It will take another viewing of these artists’ work to answer, Where is the art that questions the ideology that says nature is innocent, pure, gentle, heroic?

My lagniappe to you: Saint Francis statue in the courtyard of All Saints Episcopal Church. 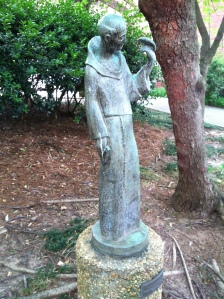