On May 17 we started with pottery at the Signature Shop and Gallery, moved on to the High Museum, and finally to the Marcia Wood Gallery.

At the Signature Shop: We love the title of this show: “Potters of the Roan,” which is also the name of the artists’ guild in the Roan Mountain area. Searching for works that go beyond the decorative has its pay-offs. (Through June 28.)

The show includes works by many others. Michael Kline was a resident artist at the Penland School, and Jenny Lou Sherburne has been a studio potter for over 25 years. Mr. Kline’s blog includes a Vine clip showing creation of a scalloped rim.

At the High Museum: The big show is currently set aside for concept cars. We felt drawn instead to the new display of African masks. According to the exhibit, “Pende masks with black-and-white faces are often referred to as masques de maladie, or sickness masks. Each represents a person who has fallen into a fire and whose face is permanently disfigured. Performances of these masks promote compassion toward individuals who have suffered such calamities.” 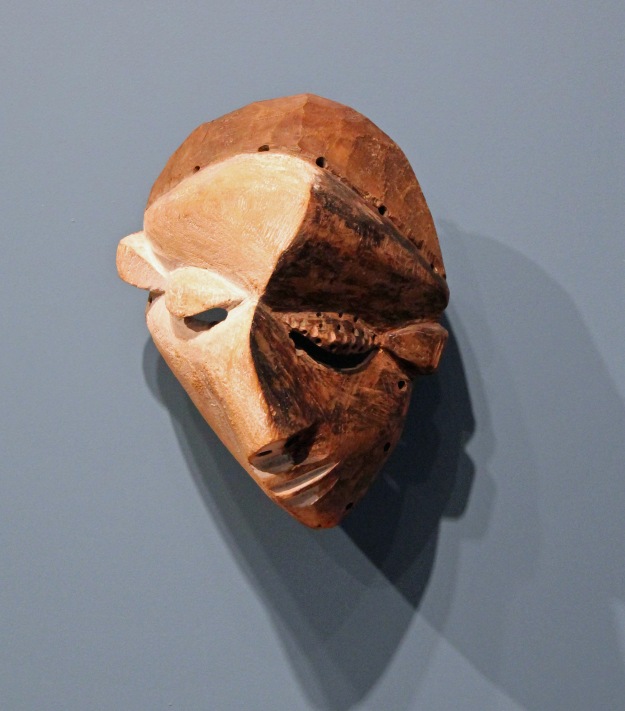 On the question of what should or should not be displayed as “art,” Dr. Jerry Cullum in an essay at Burnaway.org explores the harmonies between showing automobiles in an art museum and the Carter Center’s showing (through September 21) of functional objects from Kongo society as an art exhibit.

Medford Johnston’s works at the High through June 8 perhaps represent aspects of a foot-borne culture from the viewpoint of an American raised in a car culture. (Johnston was born in Decatur, GA.) The Museum’s wall text: “The jagged contour of the [herder’s walking] staff in juxtaposition with the graceful poise of its owner, seen in silhouette against the horizon of East African plains, inspired Johnston’s years-long study of balance, counterbalance and dissonance in the interdependent relationship between people and nature.” 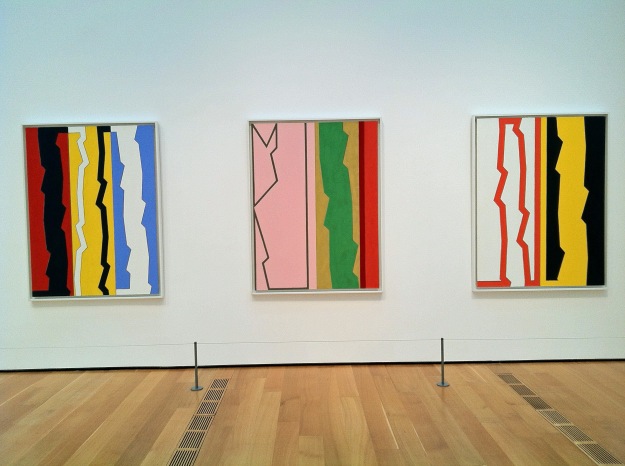 At Marcia Wood Gallery: David Humphrey gave a delightfully casual talk on his paintings and sketches. The exhibit title, “Blind Handshake,” is also the title of his book of art criticism and studio art. It was obvious that Humphrey is an intellectual force. He was mostly unfazed by an overly confident and vocal thinker in the gallery’s audience. Thank goodness for Ms. Wood’s hospitality on the patio, and for afternoon sunshine.

Where will you look for art in 2014? Sometimes we wonder if, in Atlanta, we only hear about a certain set of well marketed, media-anointed galleries, museums, and events. If so, we are allowing ourselves to be limited. We may even be allowing other people’s preferences to inhibit our own natural curiosity and wonder.

We were happy to see the ArtsATL website review an exhibit that is currently on view at the Hodge Podge Coffeehouse and Gallery in East Atlanta. Hodge Podge is an amazing place for its abundant natural light and its spaciousness. Over time, the quality of art there has been uneven. The ArtsATL review noted that Hodge Podge is not perfectly set up as a gallery. But then, it’s not supposed to be.

Atlanta Art Blog strives to find art in unexpected places. In 2013, for example, we fell for awhile under the influence of Free Art Friday. Our review reflected the open-mindedness that the Decatur event inspired.

Lately the decorative arts have attracted us, especially ceramics. For example, we read the book Carolina Clay, by Leonard Todd (WW Norton & Co.: 2008). The book explores the life and times of the potter Dave Drake, who was a slave in Edgefield, South Carolina. The High Museum of Art exhibits work by Dave in its permanent collection.

But the term “decorative arts” seems a ridiculous term to use for the pottery that Dave created under the violent and volatile conditions of slavery. It’s not that the pottery Dave created lacks elegance or  END_OF_DOCUMENT_TOKEN_TO_BE_REPLACED

The girl with a pearl earring is coming to get you, if she hasn’t already. Johannes Vermeer’s (1632-75) painting of a child in fanciful dress is the main point of marketing that the High Museum is using to draw visitors for its current leading show of paintings from the Dutch Golden Age. Her image is everywhere, and in supersized format.

Other artists of note are on display in the show, Rembrandt van Rijn (1606-69) for one. Rembrandt had a far longer career and produced a larger body of work than did Vermeer. Rembrandt, through work and perseverance, and by grace, became an old artist. Perhaps in his time, as in ours, being an old artist gained him courtesy from others, along with a good bit of the cold shoulder.

Visitors viewing “Girl with a Pearl Earring” at the High during Member Preview.

In the Rembrandt area of the exhibit, an information board asserts that artists’ work declines in quality as the artist ages. It then graciously allows that Rembrandt was an exception to that general rule. We would like to argue gently that there could be some age discrimination lurking in that statement.

If Rembrandt managed, in his last couple of years, to create work that reflected innovation, boldness of character, and sureness of method, such as in “Portrait of an Elderly Man,” it should be noted that advanced age is no obstacle to those values.

“Portrait of an Elderly Man,” Rembrandt van Rijn, oil on canvas, 1667, via Wikimedia

Rembrandt seems also to have valued artistic honesty at the time he painted “Portrait of an Elderly Man.” His subject’s mood, dress and posture suggest that the plain presentation of the real man in a particular moment could be made exquisite. The honesty of that moment could in fact be as well valued as a portrait carefully posed with an evocative scarf and a provocative glance.

We probably see Rembrandt’s pursuit of honesty in a self-portrait he painted in the last year of his life.

Beware, High Museum writers. We’re keeping our eyes on you.

The High Museum’s “Girl with a Pearl Earring” show is on view through September 29, 2013.

How does a concrete block wall double as a time machine?

Stencil on wall on Larkin Street

This graffito at ankle-height in Castleberry Hill, on Larkin Street, may be easy to overlook. Since it’s across the street from the Carl Williams Funeral Home, your mind may turn to the fragility of modern life. But once you fall under that royal profile’s spell . . . END_OF_DOCUMENT_TOKEN_TO_BE_REPLACED

In Susan Cofer’s drawings one finds a range of composition from mild and gentle to bold and troubled. They range from figurative to abstract and their approach to their subject matter leaves a curious viewer with plenty of room to wonder–about creation, sin, beauty and the fragility of life.

Most of Cofer’s drawings in this survey since about the mid-1980’s are composed of vertical pencil strokes carefully applied to reveal both imaginary and realistic detail. In an interview on the High.org website, Cofer said that her preference for vertical strokes comes from her feeling that they are easier than horizontal strokes, allowing a meditative process. Perhaps similar to the chanting of a mantra, the repetition of a standard stroke may induce a mood of calm. I’m not sure I agree that a vertical stroke is, in general, easier than a horizontal stroke. Still, as with a meditative mood, it may be that the vertical stroke encourages a movement of diving downward; meeting the surface of a thing and then going beneath that surface; going deep.

Some of the drawings display natural landscapes that are mostly devoid of evidence of a human presence. The view tends to be from a great distance. A view from the middle distance is rare. The vertical strokes suggest motion, perhaps the vibration of the earth, a motion-pattern apparently knowable through observation, though the knowledge gained is not explicitly set out here. Most of the other drawings take their small subjects in close-up view. From the mid-1980’s forward we see so many drawings that take as their subject: a seed, a fruit’s flesh, an embryo of uncertain species, womb-like abstractions, some phallic shapes. Perhaps the artist’s meditation on a landscape leads to meditation on one small element of that landscape. This may lead to a problem: Diving below the surface for answers, we frequently find . . . more surfaces.

In my view the pivotal series of drawings here is the set of 16 drawings that focuses on the story of Eve’s time in Eden. Again we see the fruit, the womb-like images, and a snake. The drawings’ titles remind us of the natural setting of a wooded paradise, mostly devoid of people; of the innocence of exploration, of questions borne of curiosity. In one drawing there appears a small, dark, beastly face-shape. We know that sin is present, the danger of fatal punishment, and sinister purpose.

After viewing the Eve drawings I sensed that Cofer’s art wants to make a path toward the secrets of creation. The images of embryos and vessels and reproductive organs and early stages of biological development seem to be crucial as subjects because of their apparent proximity to creation. The artist is passionately curious, wants to “Draw Near,” as the exhibit is called. And yet there is hesitation in the work. Cofer’s colors are very mild, and perhaps even vague until the mid-1990’s, when we begin to see purer greens, violets, and reds. Is that a hesitating shyness, or is there an ethical concern about curiosity here? Perhaps the artist imagines that Eve was punished for being curious, and if so, couldn’t the artist be punished for the same offense?

This is only my speculation about Cofer’s drawings. Still, it seems to me that the limitations and dangers of curiosity are very relevant to our time. Intellectual inquiries are frequently dismissed as pretentious or even dangerous to creativity and productivity. On the other end of the scale, science is testing the limits of ethics with its study and use of reproductive technology.

For me, Cofer’s work stimulates questions about whether curiosity is always innocent, among many other compelling themes.